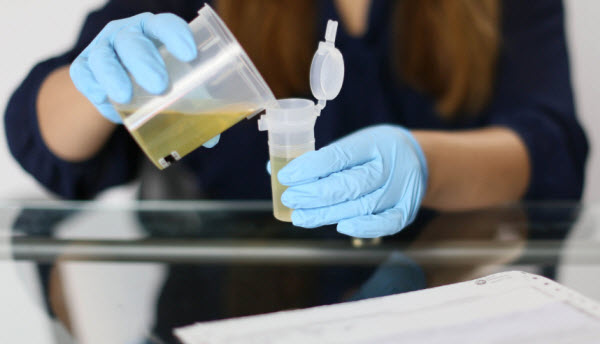 Businesses rely on laboratory-based urine drug testing for its proven methodology, capacity to screen for a variety of different illicit and prescription drugs, and ability to withstand most legal challenges. There are hundreds of urine test combinations which can detect virtually any substance for which you may need to test, with the sensitivity to meet your program’s needs for detection even at the most stringent cutoff levels.

Here are some reasons for making urine drug testing a foundational tool in your program.

5. A urine drug test can be completed at a collection site such as a Quest Diagnostics Patient Service Cente(PSC), clinic, or doctor’s office. Urine drug testing requires a minimum of 30 mL of urine (45 mL for a U.S. Department of Transportation collection) collected in the privacy of a restroom. A collector then pours the urine specimen into a bottle that is sealed with tamper-evident tape. The drug test specimen and completed Custody and Control Form (CCF) are sent to the laboratory for testing. Learn more about what to expect at a drug test and read our do’s and don’ts.

6. Some donors try to cheat urine drug tests. While it is the most common drug testing method, urine testing is not foolproof. Donors may try to beat a urine drug test diluting their sample, adding contaminants, or even trying to substitute another person’s urine for their own during the collection. Specimen validity testing completed by a laboratory ensures the integrity of a urine specimen and filter out cheating attempts. Protocols like measuring pH, creatinine, and specific gravity (when indicated) and help to identify results not consistent with human urine.

7. Urine is the only approved specimen type used for Federal drug testing. A regulated urine drug test is performed for specific agencies categorized as “safety-sensitive” because of the potential influence of their job on public safety. Safety-sensitive workplaces fall under the Health and Human Services (HHS) or Nuclear Regulatory Commission (NRC) testing authority, or are part of one of the agencies under the U.S. Department of Transportation (DOT). The collection of a regulated urine test is guided by the DOT’s requirements outlined in 49 CFR Part 40. Drug testing programs aim to filter out drug users and deter drug use in the workplace. Urine testing, like all drug testing methodologies, helps to mitigate potential risks by screening out job applicants and employees who use drugs .